In the production of board, the Yankee cylinder is used to give glazing polish to the board. The drying intensity of board machine Yankee hoods is usually not very high because of quality reasons, but the latest board hoods are being designed for high air temperatures. 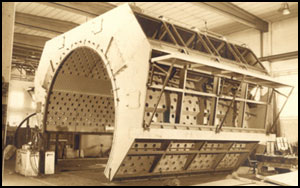 Depending on the requirement of air impingement temperature, the heating medium for heating the recirculated air can be:

DRYING PROCESS
The drying system that consists of MG cylinder and MG hood is an arrangement that combines two methods of heat energy transfer. On one side, heat is transferred from the cylinder to the web by conduction, while simultaneously, on the other side, energy is transferred from the hood to the web by convection. Consequently, the hood and the cylinder have to be considered as a combined system. The following factors have the most effect on the drying efficiency:

DESCRIPTION
The Schematic arrangement of Centralized steam-heated MG Hood is enclosed.
The hood is installed on top of the MG cylinder in two Sections - Section 1 and Section 2. Hot air is supplied through two recirculating fans (Item nos.1 ) and then through two heaters (Item Nos. 3 ) into the blow boxes of the hood. The hot air is utilised in evaporating moisture in the paper.

The moisture laden air is sucked out of the hood through return air pipes provided in the blow boxes and then through a common air duct provided in each section of the hood. The return air from each section is then led to a common plenum box. On either side of the common plenum box there is a wire-mesh filter box (Item No.6) with wire-mesh filter (Item No. 4) for filtering the re-circulating air. A portion of the moisture laden return air from Wet Section of common plenum box is bleeded out of the System through the exhaust fan (Item no.2 ) via a Heat Recovery Unit (Item no. 5).

The remaining Portion of return air from each section is recirculated into the system through recirculating fans and then through the heaters as stated before. The fresh air (or make up air as it is called) is filtered in Fresh Air Filters (Item No.7) and is preheated in the Heat Recovery Unit by utilising the heat from the exhaust air. The heated fresh air is then led into the common plenum box.

CONSTRUCTIONAL DETAILS
The hood is constructed out of sturdy MS plate on the drive and operating sides. The Upper and side portion of the hood is covered with insulated panels which are made from steel frame and outer Aluminium sheets filled with resin bonded mineral wool insulation. Two supply air openings are provided in the hood which are connected to the blow boxes. The blow box is made in segments. It is made of perforated cold roll sheet of 2 mm thick and is complete with return air pipes which serve as a passage of the return air. The hot air is impinged on the paper over the MG Cylinder through the perforated holes in the blow box. The return air alongwith the moisture evaporated is sucked out of the hood through two return air openings provided in the hood .

The supporting structures of the HV Hood are of MS painted with primer paint (not included in our scope).

Inspection openings with easily removable covers are provided for removing fine paper fluffs which may get accumulated during operation.

Necessary sealing arrangement between MG Cylinder and Hood is provided to prevent ingress of cold Air into the Hood.

RETRACTION ARRANGEMENT
The Hood is made in two halves, each of them is provided with CI Wheels on either side which can slide on a support rail. These halves can, with the aid of Pneumatic cylinders, be moved from the MG Cylinder to improve the possibility to clean and inspect the space between the Hood and the Cylinder.
The Hood can be retracted by 200 mm on each side. The total gap between the two halves when fully retracted is 400 mm. To take care of the Retraction suitable Flexible connections are provided in the external Supply and Exhaust air ducting connected to the Hood.